Some thoughts on Fat

Some thoughts on Fat 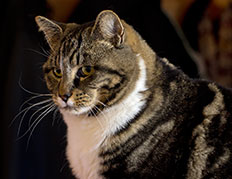 Dr Ricketts and I recently attended a lecture by Dr Towell a leading nutrition expert.  The topic was feline obesity which has become quite a hot topic for several reasons. One is that unfortunately, we have plenty of “subjects” to study!  And there are several parallels between cats and people with Type 2 Diabetes.  Fat is now considered an organ as it is capable of producing over a dozen hormones.  It is described as the only organ with unlimited growth potential!  A frightening thought!

These hormones are involved in both the up regulation and down  regulation of various pathways that either store or burn fat.  There are pathways that tend to store fat.  Unfortunately, these still tend to be the predominant pathways despite our easy access for food and typically sedentary lifestyle.  There are  no easy fixes but the focus of good health remains to be a good diet and exercise.

One of  the best things you can do for your pet is to feed it properly and exercise with it.

A few feline specific tips that were discussed that night:

Introduce young cats and kittens to both canned and dry.  Texture issues can be significant in cats so it is important to try to introduce them when they are young.  Canned food is also much less calorie dense as it has water in it.  Take it from Tucker.  He was able to loose 3 # going from an all dry diet to a 75% canned diet.  And he has kept the weight off!

Have your cat hunt for food!  This technique can be especially helpful for the overweight cat that enjoys eating, sleeping and that is about it. By putting several small food dishes all over the house, the cat must make numerous trips to the food dish.  It gives the cat a little bit more activity than just sitting at a big dish. You can also purchase at pet stores the the small food balls that you can put dry food into   The cat then has to do physical activity to get the food to come out.

And last but not least, portion control!  Have you seen what a quarter cup of food looks like?  Many do not measure food portion except with the eye.  And we typically tend to be way off when it comes to that.  The easiest thing to do it to portion out your pet’s food as you normally would then take out a measuring cup.  Cut back 10% and then keep using the measuring unit.

We can all take heed with these little tips.  Keep portions under control and get out there and exercise!