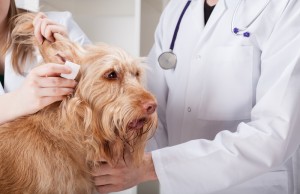 Many people are familiar with ear “infections” that occur quite commonly in children these days. Our dog patients can also be affected by these problems. There are a few things that are important when understanding otitis. “Otitis” by definition, means inflammation of the ear. Inflammation has many causes and can include bacteria, yeast as well as allergies and parasites.

Each dog has a normal “flora” or population of yeast and bacteria that inhabit the ear canal. If triggered by parasites, allergies or other irritants, the flora becomes unbalanced. This leads to an excess amount of debris and often a not so pleasant odor. The yeast and bacteria may go into overdrive and nearly ooze out of the ear. This can lead to scratching, discomfort or even a head tilt from the irritation.

The ear canal itself is shaped like a “L” with both a horizontal and vertical canal. In big dogs, it can be several inches long. The ear canal normally should just have a little wax in it. When otitis occurs, the debris often settles down in the horizontal canal and slowly erupts into the vertical canal where an owner can visualize it. In chronic/long term cases, the ear canal can become narrowed due to chronic inflammation.

In each case of otitis, the underlying cause should be identified as to try to resolve the problem. To do this, the ear debris is evaluated and the ear is examined with an otoscope. To clean the ears, soft cotton balls are used. No cleaning agents should be squirted into the ears. It is too uncomfortable (and your dog will run when they see you coming with the bottle!). It is best to apply a small amount of the prescribed cleaning agent onto the cotton ball. You can use the cotton ball like a thimble on your finger to make a sweeping motion out of the canal. Once cleaned, medication may be instilled directly into the ear canal as directed. In some patients, sedation or even anesthesia maybe needed to evaluate and clean the ears.

Most cases are treated with a topical medication. In dogs that have otitis as a result of an allergy such as hay fever, some systemic medications may be necessary. This often happens in certain breeds that are more prone to inhalant allergies (atopy) such as Golden Retrievers and Labs. Others may be allergic to foods so a food trail with a “novel” ingredient (something that the pet hasn’t eaten before, for example sweet potato and fish) may be indicated. Whatever the cause, it is important to try to determine what it is so that the normal ear canal flora can return. In many cases, this does require frequent monitoring and maintenance cleaning by the owner.

In cases with dogs with severe otitis that has not been medically manageable, surgery may be warranted. The surgery actually removes the ear canal…and the problem!

Is my dog’s hearing affected by otitis?
In most every case, yes. It may be more subtle in some dogs but having the ear canal packed with debris does diminish the body’s ability to receive auditory information. In chronic cases, the dog may be completely deaf. Due to keen other senses such as smell and vision, most owners are not aware of the deficit.

Just because my dog has an ear infection, will this become a long term problem?
Fortunately, many dogs and cats just go through the battle with otitis just once or twice. Some cases are chronic, but with good medical management and frequent maintenance, are “manageable”.

Does the black debris mean my pet has mites?
Ear mites are tiny little parasites that inhabit the ear canal. They tend to prey primarily on the very young or those in charge of them (new mom dogs or cats). The debris involved in ear mite infestations is very dry and looks like ground coffee in the ear canals. it can be easily treated with a topical medication. In it very uncommon to see these parasites in adult animals unless they are with a kitten or puppy that is infected.

Can I use q-tips and other tools to clean my dogs ears?
Just like your mother said, never put anything smaller that your elbow into your ear! This is pretty true for our pets also. Cotton balls are soft and even if you’re afraid to “lose” one when cleaning the ear, the animal will shake it out. Q-tips should generally not be used as the animal may not hold still and injure itself. Although inexpensive otoscopes can be purchased at some pet superstores and catalogs, they are not indicated to clean, diagnose or treat otitis by a pet owner.