How the Gut works:
I like to consider the gut as a manufacturing plant. You take food as the “raw material” and the finished end product is formed poop. If anything goes wrong along the way, there are signs to indicate it. As in any manufacturing plant, there are several steps/processes that need to take place along the assembly line in an organized manner to make a quality end product. Many chronic gastrointestinal problems are lumped under the diagnosis of Inflammatory Bowel Disease, other types are dietary indiscretion, parasites, metabolic, congenital and cancerous. By looking at the gut piecemeal as well as the raw material, one can have a better understanding of what the problem is as well as the most specific way to attempt to formulate a solution. 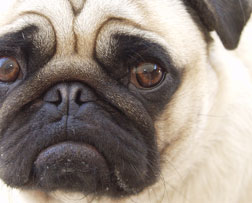 Sometimes it is a simple fix. An example would be a dog eating a dead fish on the beach and getting diarrhea. Dead fish is not a good raw ingredient! So the gut gets rid of it as soon as possible (hopefully not on the new rug!) The patient should do fine once the diet is restored to normal. A more complicated gastrointestinal problem is when the animal has developed a tumor (cancer) of the intestine itself. Then it is more difficult to get those workers retrained as they are cancer cells and care only about themselves and not the process that should be taking place.

Another common problem we see that affects the gut is parasites, especially in our young patients. They are frequently infested with parasites such as roundworms. What happens is that the worms compete in the gut itself for nourishment thereby taking food away from the animal. They can also cause vomiting if there is a large worm burden just by their numbers alone. Diarrhea occurs because the worms are disturbing the normal exchange of water and nutrients.

Food allergies are becoming a more frequently diagnosed problem as well. Many cases of inflammatory bowel disease can be due to a food allergy. Unlike humans with food allergies (for example, immediate shellfish allergic reaction resulting in acute anaphylactic event), animals tend to develop allergies or sensitivities to food after months or even years of being exposed to that ingredient. The animal may show signs of chronic diarrhea that does not respond to standard treatment. Others, especially cats, may show frequent vomiting or regurgitation.

The odd thing with many pets with food allergies is that they may not show signs every day. They may have several days in a row during which they are symptomatic, then go a few days without any problem. Many small breeds such as Bichons and Westies are often affected by food allergies. Those dogs may often lick their paws incessantly due to the allergy.

To diagnose food allergies, we utilize a blood analysis that tests the animal’s reactivity to numerous common food sources. These include, but are not limited to, chicken, fish, beef, rice, flax seed, potatoes and corn. We have found the simple blood test to be very accurate and reasonably priced. Other options to diagnose food allergy can be done with diagnostic procedures such as endoscopy or colonoscopy. These procedures are non-invasive but are done under general anesthesia.

Biopsy (tissue samples) are obtained and analyzed for abnormal cell populations in the gut itself. If you go back to my analogy of the gut being a manufacturing plant, then the cells are poor workers that are just not able to get the job done right. With these procedures, one is only able to identify that there are ill-suited workers for the job. Additional testing and food trials are then still necessary to attempt to correct the problem. By determining which foods the animal is reactive to, the treatment may be simply just eliminating them from the diet, rather than having to go on immunosuppressive drugs or chronic antibiotic therapy.

SIGNS OF GASTROINESTINAL DISEASE can include but are not limited to:

If your pet has had signs of gastrointestinal disease, call the office to speak to a receptionist or technician for recommendations. Depending on the severity of the signs and your pet’s individual health history, recommendations will be made.