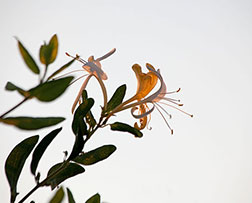 Flower essence therapy was developed over 70 years ago by the physician, Edward Bach. They are infusions of flowers that work with the body’s emotional state. In disease and stress, the emotions can become unbalanced leading to both mental and physical symptoms. He was able to discover the healing properties of wild flowers. I like to think of them as mood enhancers. They do not “drug” or sedate the patient but rather try bring the emotions back into a positive position.

For the animals, they can be very helpful for many situations. There are hundreds of flower essences that can be created for an individual’s specific needs. We use the BACH line of flower essences which is about twelve different essences that are used most commonly. Each small vial is made up of a tincture with one or more flowers in it. The tincture is best given by placing 10 drops in the drinking water or diluting them in a small amount water and mixing with food. They may also be given by placing 2 drops directly on the nose or the ears although some animals may not like this! It is ok for multiple pets sharing the same water as the essence will have no effect on those that are in balance.

ASPEN Cats and dogs that are fearful and nervous can relax with aspen. Aspen can be for the fraidy cat that always hides under the bed with any noise. Many dogs that would benefit from aspen are those that are submissive wetters and may have been in a shelter in the past.

BEECH This generally a cat remedy as this flower is for the “queen” personality. The cat that is superior to the others in the household. Can be very helpful for the cat that is intolerant to others including people!

CLEMATIS Clematis is helpful for those that need a little jumpstart after a trauma, anesthesia or even just at the beginning of their life. For animals that have been stressed during the birthing process it can be combined with Rescue remedy to help them breathe.

CHICORY Chicory is the remedy for those pets that are overly devoted to their owners, constantly underfoot or on top of their lap. Although it can be flattering, these animals can become very stressed when left alone which can lead to anxiety and even injuries to themselves.

CHESTNUT BUD Helpful in training situations as the animal is learning it’s boundaries and acceptable behaviors.

HONEYSUCKLE When a pet is faced with the loss of it’s owner or housemate, this remedy can help them with the grieving period. If an animal is acting subdued, withdrawn after a new move, this can also be very helpful in easing the transition. For animals going to a kennel that might experience some homesickness, this remedy can be given before as well as during the kennel stay.

HORNBEAM This remedy is given to strengthen the sick patient.

HOLLY This remedy is used with STAR of BETHLEHEM for pets that have behavior problems relating to aggression issues. They may bully other pets in the house or even threaten to attack people.

LARCH usually a cat remedy, this is very helpful for the cat on the low end of the totem pole. This cat is usually the last one to be fed, petted etc. May be described as an ” intro-vert” personality and may problems with over-grooming (known as psychogenic alopecia) Self -esteem is very important for a feline’s well-being ans is usually radiated by an emotionally balanced cat.

MIMULUS is very helpful for those afraid of loud noises and thunderstorms.

OLIVE can be used for the animals that are severely traumatized or ill and trying to regain their strength.

STAR OF BETHLEHEM is a strengthening remedy to help heal those who have had trauma, physical or psychological, past or present. For animals that are found and have no known history, have spent time in shelters or on the streets.

SCLERANTHUS decreases anxiety and nausea for some with car sickness.

WATER VIOLET This essence can be described as a constitutional remedy for most cats which helps them keep their independence while still interacting with people and other animals in their environment. For dogs that may have been socialized later in life and seem stand-offish.

WALNUT is extremely helpful for any changes that may occur in a pet’s life such as moving, new pet or baby in the house. It can even be used during busy holiday season’s when a pet’s routine may be disrupted due to house guests and parties.

VINE This is for the boss cat, the one who rules the roost and the household.

VERVAIN High strung animals with a great deal or nervous energy. Should be used in conjunction with conditioning exercises to help the animal be well-behaved.

RESCUE REMEDY/CALMING ESSENCE This is the remedy for ANY type or stress or anxiety. It can be used for trips to the vet, recovery from surgery, new pets or babies in the house, etc. It is the remedy with the broadest applications. Many owners may also benefit from this when they are dealing with their pet’s behavior problem, illness or death.

Flower essences are inexpensive and can be purchased at the Beverly Animal Natural Health Center and health food stores.